In the first quarter of 2021, the increase in sales of base metals and metal products from Lombardy, Lazio and Veneto and machinery and equipment from Lombardy, Emilia-Romagna and Tuscany explains for 2 points percentages the growth of national exports. Otherwise, the contraction in the export of means of transport (excluding motor vehicles) from Liguria and Friuli-Venezia Giulia and pharmaceutical, chemical-medicinal items and botanicals from Lombardy provides a negative contribution of 1.6 points to the change in exports.

The provincial export analysis shows positive performances for over two thirds of the Italian provinces: i higher positive contributions were recorded for Florence, Rome, Turin, Brescia, Verona, Bologna and Bergamo. Yes they signal the negative dynamics of Genoa, Milan, Trieste and Syracuse. 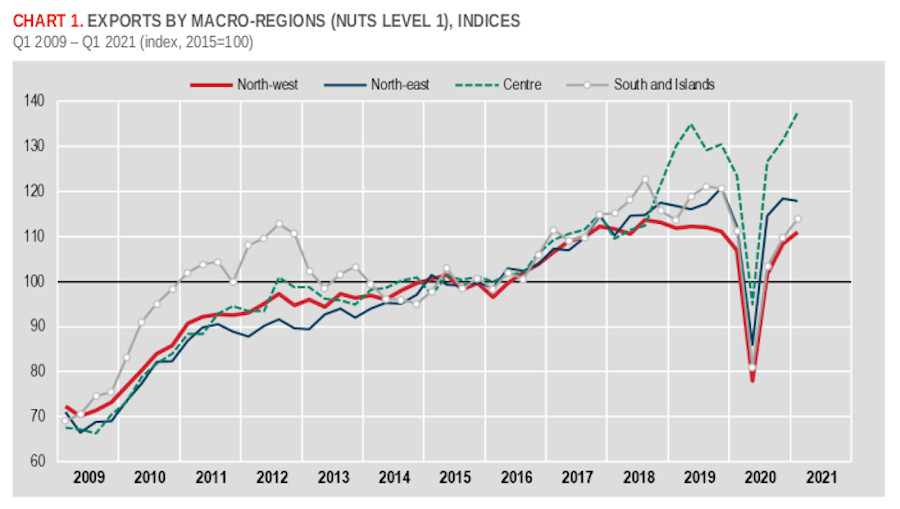 The comment
In the first quarter of 2021, the cyclical growth of exports national is essentially driven by the increase in sales of Central and Northwest regions.
On an annual basis, the export dynamics are positive for all divisions, with the exception of the Islands. The biggest positive contributions they come from the great regions of the Center - Tuscany and Lazio - and of the North - Lombardy and Emilia-Romagna - whose performances explain by 3.5 percentage points the tendential increase in national exports.
The large declines in exports of Liguria and Friuli-Venezia Giulia are conditioned by occasional high-impact operations (shipbuilding naval) registered in the first quarter of 2020; for Sicily, the decline is mainly due to the contraction in sales of energy products.

In this section we report some documents of Italian or International Organizations, Institutions and Companies.